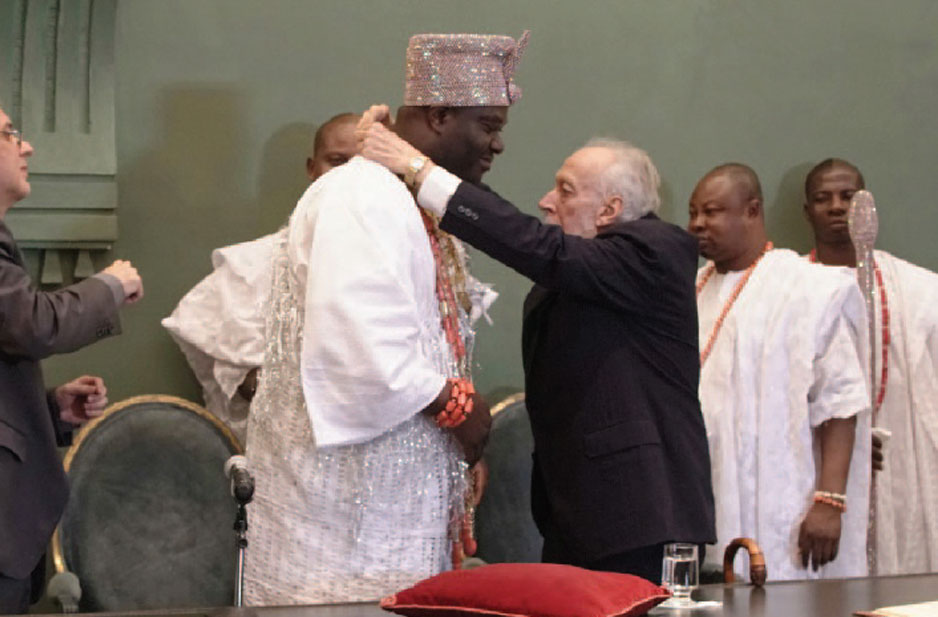 As he continues to promote global pledge of bringing universal peace to people of diverse religious belief sthe unyielding work of the Ooni of Ife, Oba Adeyeye Ogunwusi, was recognized when he received the coveted ‘Academic Palms,’from the Academy ofLetters in Brazil.

The highest honour which is usually granted to Heads of States, Ministers and President of High Cultural Association, leader of the community, Academician Alberto da Costa e Silva,who had been ambassador of Brazil to several countries in Africa, stated that The Ooni was honoured for his work towards promoting a peaceful co-existence.He said: “The ‘Academic Palms’ is the highest honour granted by the Brazilian Academy of Letters and only delivered to Heads of State,Ministers, Presidents of High Cultural Associations is being conferred on Ooni Ogunwusi because he is promoting peace all over the world. We don’t just honour people.Our awardees are immortals for services rendered to the letters, sciences, arts and cultural approach of the peoples and great writers.”He continued: “Óòni hasa special meaning by the strong spiritual presence ofthe Yorubás in the life of the Brazilians.

Ooni Adéyeye isa Kind of Pope in and out of Nigeria and Africa as a whole”.Responding, Ooni Ogunwusi called for tolerance among people of diverse cultural dispositions and religious beliefs.”During what was a hugely celebrated visit to the South American country,Ogunwus and his entourage – who included: Queen Dambi Kabatusula of Kasai Kingdom in Democratic Republic of Congo; Professor Sophie Oluwole; Professor Kola Abimbola of Howard University, USA; Sooko Laekunof Ife, Prince Adegboyega Ogunwusi; scholars, priests,government officials; members of Herbal Therapy Society Of Nigeria led by Chief Akintunde Ayeni of Yemken Group and a renowned Nollywood actor,Saheed Balogun - were well received by members of the community. He also took up the opportunity to meet with former Brazilian Ambassadorto Nigeria, Maria Auxiliadora Figueiredo, who was lordedby The Oooni for her workin fostering greater unity between Afro-Brazilians andAfrica.

“The royal father promised to further strengthen his campaign for religious tolerance,” da Costa e Silvasaid, “as well as abolition of all forms of discrimination against Afro-Brazilians.”Other member of The Ooni’s entourage of 120 people during the 10-day star including Yoruba traditional rulers like Timi of Ede, Ajeroof Ijero-Ekiti, Olugbon ofIle-Igbon, Alaran of Arandun,Olowa of Igbara-Oke, Jegunof Okitipupa, Elerinmo of Erinmo-Ijesa, Onisabe of Sabe-Igbobi, Alayandelu of Ayandelu,Owakogun of Okerewe-Ife,Alayemore of Ido-Osun.The ‘Academia Brasileirade Letras,’ which was established at the end of the19th century, is composed to this day of 40 members,known as "immortals", chosen from among the citizens of Brazil, who have published recognized works or books of literary value.